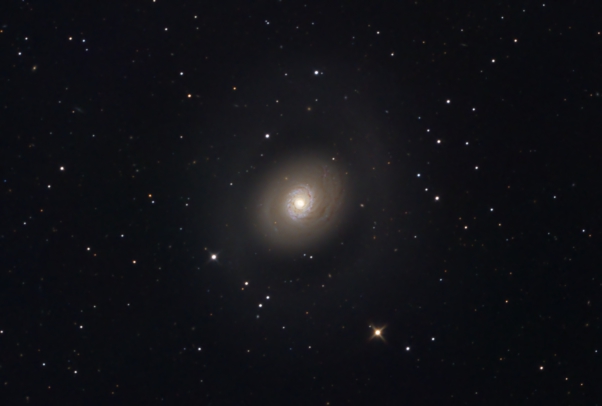 The M94 is a bautiful galaxy a mere 15 million light-years distant in the northern constellation of the Hunting Dogs (Canes Venatici). The face-on spiral galaxy is about 30,000 light-years across with a compact, bright nucleus, prominent inner dust lanes and the remarkable bluish ring containing numerous clusters of young blue stars. The ring stars are all likely less than 10 million years old, indicating that M94 is a starburst galaxy that is experiencing an epoch of rapid star formation from inspiraling gas.

M94 has a second outer ring structure. The outer ring of M94 is not a closed stellar ring, as previously believed, but a complex spiral arm structure seen in mid-infrared and ultraviolet wavelengths. Recent obeservations revealed that the outer ring is in fact a structure of two spiral arms that looks like an unbroken ring when seen from Earth. The ring is active and produces a substantiel amount of new stars in the galaxy. The outer ring was previously thought to have formed when M94 absorbed a smaller satellite galaxy or as a result of interaction with a star system. However, neither of these theories was supported by research.